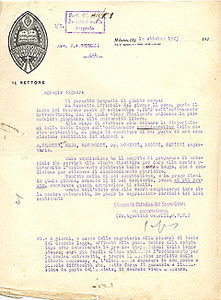 Since the establishment of Università Cattolica in Milan, in 1921, the academic authorities have always conserved and archived the documents that were produced or received by the Rectorate, the governing bodies and the Faculties.

The first Statute of the Giuseppe Toniolo Institute of Higher Education, the founder and promoter of Università Cattolica, endorsed the Rectorate Secretariat with the responsibility ‘to carry out every administrative assignment, to meet the needs of each Faculty and every bureaucratic procedure, to archive every document and to handle the correspondence of the Rector, principals and Steering Committee’.

Over time, the meticulous safeguarding of documents that were considered vital for reconstructing the history of Università Cattolica has resulted in a huge archival heritage which was, however, partially damaged in wartime. Indeed, many documents archived between the 1920’s and the early 1940’s were destroyed by the bombings that targeted Università Cattolica in August 1943 and caused the fire and the partial collapse of the building where the offices were located.

Fortunately, many archival documents had been previously deposited safely in the University basement or in locations outside Milan. The documentary testimonies of the dramatic events of the Second World War indicate the level of apprehension that resulted in the safeguarding of the records. Father Agostino Gemelli himself played an important role in this together with his closest collaborators, mainly the first academic secretary, Piero Panighi, and the ‘bursar’ of Università Cattolica, Armida Barelli.

The original nucleus of the Cattolica’s historical archives, consisting of funds called Corrispondenza e Miscellanea, was made accessible to the public in 1984 and, in 1995, the Historical Archives Service was established to conserve and manage the University’s historical maps and photographic archives. The Service has salvaged the documentary heritage conserved at the University and has rationalized the consultation procedures. Its investigations have uncovered significant documentary resources at the administrative offices, the Library and the University’s teaching facilities.

Between 2005 and 2007 a broader census was carried out that extended to the various Università Cattolica campuses and to the archives of institutions and body’s that have been closely linked to the institution. This survey, linked to the multi-year project that reconstructs the History of Università Cattolica del Sacro Cuore, highlighted the consistency and the importance of the documentation relating to the history of the University and explained the need for restructuring the Archive and its management service.

Indeed, the original nucleus of archives has been amplified by substantial resources of historical documents that have been entrusted to the care and conservation of the University Archive.

The General Archive for the History of Università Cattolica, supported by the Historical Archives Office, was established in 2011 to serve the entire University.

The Archive curates the conservation, sorting and inventorying of the documentary, paper and multimedia heritage related to the history of the University.

It is headed by the Rector who appoints a Scientific Director with proven historical-archival expertise from amongst the professors at the University.